What you need to know before your first Barre class 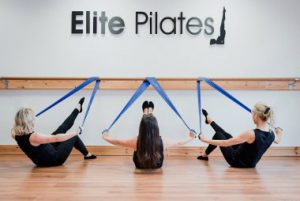 So you’ve been wanting to try barre ever since you heard that that’s what keeps those Victoria’s Secret models in shape, but you aren’t exactly sure what it is and you’re kind of scared, correct? You’re not the only one! We got our lovely intern, Diana, to take her first barre class with us, and here’s what she had to say about her Elite Barre experience.

When I first heard about barre class I thought it would be similar to ballet, oh boy was I wrong! I used to attend ballet class when I was younger and I expected that the barre would be the same. My expectation was that we would stay at the barre focusing on legs, therefore being primarily a lower body workout. So, arriving to class I was very excited to see what it would be like.

The class started with the warm-up and then we took to the barre. We first worked our legs doing squats, lunges and standing on tiptoes. We also we used resistance bands over our knees and with them we raised the legs, at this point I think the muscles of my legs had really started to wake up (a.k.a burn) and I knew this was no regular fitness class. The instructor, Jenny, made sure to do lots of reps and next thing I knew my quads, bum and abductors were starting to shake, something that I had heard about amongst barre fanatics! It was difficult, but the instructor encouraged us to keep going and continued breathing. Jenny made it clear that it’s very important to control your breath so that the muscles will be able to oxygenate correctly.

After our legs were well and truly cooked, we moved on to arms, working our biceps and triceps among some other muscles that I didn’t even know existed. We worked hards doing pull-ups at the barre and also she introduced weights to increase the intensity.

Finally, we finished on the mat (a much welcomed chance to lye down, or so I thought!). I was expecting this was time to relax but not in a barre class! We did some grilling abdominal work and then we were rewarded with a lovely stretch.

So, at the end of the class I realised my predictions were wrong. The class was a full body workout, working muscles from top to toe and as I mentioned some I certainly hadn’t felt in a long time. It was not easy but I felt amazing.

The next day I definitely had the doms in my legs in a good way because I could really feel that I had worked hards and strengthened my body. I would definitely recommend giving barre a go and I’m already looking forward to my next class.